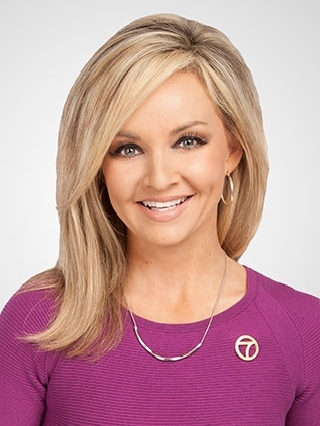 Alyson Courtney is thrilled to be a member of the Channel 7 News morning crew! She is an award-winning journalist who has been a part of morning television in Little Rock for several years.

Originally from Shreveport, Alyson previously worked in television markets in Louisiana and Texas but has called Arkansas home since 2003. She graduated with a degree in Broadcast Journalism from Northwestern State University and began her career as a morning news producer. From there she set her sights on reporting and became a one-man band. Yes, she shot and edited all her own stories behind the camera then stepped in front of it. Alyson explains, "I learned a lot. It was the hardest job I've ever had, but an experience I would never trade."

Alyson has reported on important events, people and issues all over the state and has won numerous Associated Press awards, Edward R. Murrow awards and has been nominated for an Emmy for her reports on the dangers of drunk driving.

While she loves her job, Alyson's favorite role is that of "mommy". She and her husband have two girls, Brooklyn and Berkeley. Alyson says, "I love hanging out with my girls! Being a working mother with an early morning schedule is hard, but I love that every, single day is an adventure at work and at home. We have two main rules we try to teach our kids and live by ourselves: always be nice to everyone, no matter what and HAVE FUN!!!!!! That carries over to my job and that's why mornings are such a great fit. I really enjoy the more laid-back feel to morning news and also being able to report on the good things that are going on in our state."

Alyson's favorite assignment is reporting live from Arkansas Razorback games. She believes in giving back to her community and is a big supporter of Arkansas Children's Hospital, the March of Dimes and the Arkansas Foodbank Network.