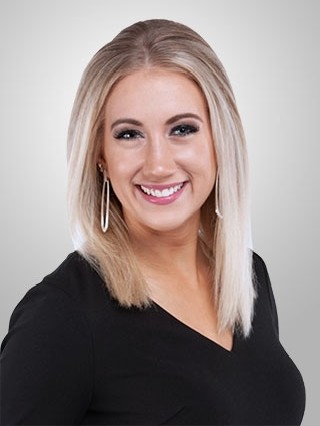 Ansley Watson joined the team in August 2017 as a reporter for Good Afternoon Arkansas.

She grew up in Highland, Illinois. Ansley attended Harding University in Searcy, Arkansas, and graduated in 2015 with a B.A. in Broadcast Journalism. During her time at Harding, she had the opportunity to travel abroad to Australia, New Zealand, and Asia. She was also heavily involved within the communications department, helping with its radio and TV program.

Ansley participated in internships, which included working with a positive hits radio station in St. Louis and producing media and marketing content for a Minor-League Baseball team called the Gateway Grizzlies.

Before her time at Channel 7, Ansley worked as the morning reporter for WLUC-TV6 in Marquette, Michigan. She spent several days in the Upper Peninsula covering harsh weather conditions. In turn, this helped her earn first place from the Michigan Association of Broadcasters on a breaking story of a flood washout.

Ansley has several hobbies, which include running long distance, traveling, and beekeeping; which she began at age 14 with her father.