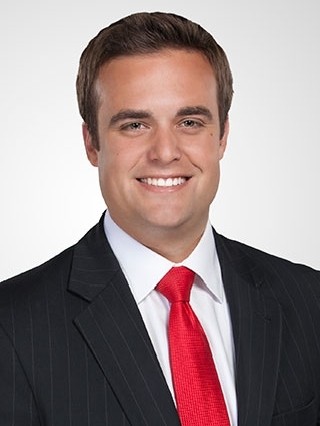 Chris is a Little Rock native who currently anchors Daybreak and Good Morning Arkansas at KATV Channel 7. He is also a member of the broadcast team for the University of Central Arkansas Football. Go Bears!

Chris was born in Little Rock and moved to Ponte Vedra Beach, FL when he was ten years old. That’s where he became a huge NFL fan, specifically the Jacksonville Jaguars. With his parents both attending the University of Arkansas, Chris is also a lifelong Razorback fan.

While in Florida, he attended Bishop Kenny High School and went on to graduate from the University of Central Florida in Orlando with a Radio/Television Degree. Go Knights!!!

Before becoming Weekend Sports Anchor, Chris hosted FLW College Fishing on VS. Network with former Channel 7 host Jason Harper & Professional Angler Justin Lucas from 2009-10. During this time he was able to travel the country hosting fishing tournaments. He says this time was an amazing experience being able to learn from Jason and work with some of the most genuine people in the world.

Although he joined the station officially in 2010, Chris completed 3 internships at KATV in the Sports Department with Steve Sullivan, Dale Nicholson and Anthony Eckart.

As far as Daybreak goes, there is not a better crew around. From the crew behind the scenes, to co-hosts Melinda and Alyson, work is truly fun in morning.

When he is not at the station he enjoys being with his college sweetheart Chelsea, son Bennett, daughter Darby and dogs Charli & Knight. He also enjoys all the outdoor adventures Arkansas has to offer.